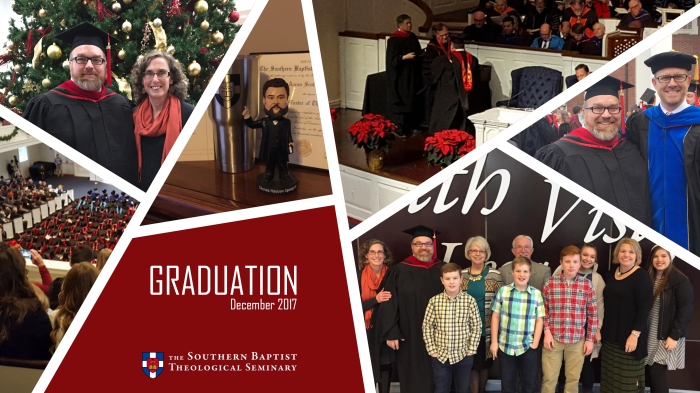 As we sat at the graduation rehearsal, one professor encouraged all the graduates with the reminder that this event was the culmination of all our hard work and a conclusion to the goal we had all set years before. In one sense this was encouraging, but at the same time, I struggled with the emotion of loss and maybe even a little bit of failure.

A ThM wasn’t the degree I had set out to achieve. I was sitting one row behind all the students that were receiving the degree I had worked towards. I wouldn’t be receiving the DMin I had initially pursued. Maybe I sound petty and probably even a little childish, but I wanted stripes on the sleeves of my graduation regalia. (Read that with the tone of an elementary child stomping their feet.) I wanted the short golden tassel and not the long red one. And no, it’s not because I don’t like red. It’s what those stripes and that tassel signified. My not having them signified that I didn’t accomplish the task and the degree that I had pursued. As a result I felt a certain level of sadness, coupled with a little embarrassment. A couple of the other students sitting in front of me were in class with me and were aware of my having begun the DMin program and now saw that I was “settling” for something less. Maybe they thought I couldn’t handle the rigors of the program or thought I was not capable of all the work they had put in. On a daily basis, their opinion of me had never really mattered. But it did in that moment. So then add pride to my sadness and embarrassment.

I’m proud. I wanted the more prestigious degree. I want people to call me Doctor Sturgill and then have the opportunity to appear humble as I tell them not to call me that and that degrees don’t really matter to me. And yet they do. Not because my pastoral responsibilities demand it. Not because my church family has expectations of doctoral accolades. But because I have established in my own mind an opinion of people with doctorates that I want others to have of me.

Nearly two decades ago, I set a goal. By the time I was 40 I wanted to have been faithful in ministry for at least 15 years and have successfully received a doctoral degree. I suppose to assess that goal, we would need to define faithfulness, but setting that aside, I have served in pastoral ministry for the last 16 years. And I was “this close” to the doctorate.

What I have come to realize and value, if not cherish, is that God can do whatever he wants, and my personal goals seem to rarely play much a part in his plan for my life. God’s plan for our lives had my acceptance at Southern coincide with Linda’s struggle with cancer. While other students were finishing up the first chapter of their project, I was sitting in a hospital with my wife – not begrudgingly mind you. So then, cancer stole my dream, and yet, God’s plan is always better than my dreams. God’s plan for me is that I’m more and more transformed into the image of His Son. James tells me that transformation occurs as I go through “various trials.” If various trials produces steadfastness which then results in my being “complete, lacking in nothing” then bring on the various trials because I want to be more like Christ.

So then – back to the initial encouragement during the rehearsal. I was to be encouraged that I had arrived at the culmination of all our hard work and achieved the goal we had all set years before. This is where the mix of emotion comes in. I may not have accomplished the dream I initially had, but if I had completed the task God had prepared for me in this educational adventure, then I had in fact arrived at the culmination of my hard work and achieved my goal. What is most important here is that my cognition then worked on my affections, and I sensed the emotions of accomplishment, relief, and joy.

So then, loss, failure, and embarrassment took way to accomplishment, relief, and joy. Of course I had to work through that as I sat there listening last Thursday afternoon, but I did eventually get there, and that is where I intend to stay.

With that said, I’m so close to getting my DMin that I may very well try to finish it up in the not so distant future. I’m sure my kids and most amazing wife would appreciate if I hold off for a few years, but after the kids are gone (or mostly gone) who knows what God’s plan will be. For now, I’m looking forward to jumping back into ministry equipped with the tools to prayerfully and more effectively serve the wonderful church family God has graced us to serve.

3 thoughts on “Reflection on Emotion”