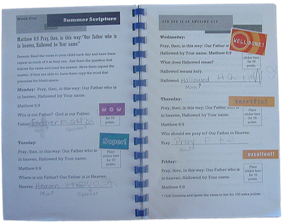 Last week we received in the mail a verse workbook for each of the kids. Grandma thought it would be a good idea to give each of the kids (all the nephews and nieces) a verse workbook to work on throughout the summer.  We received ours last week.  They have been working on them pretty diligently.  Each of them has enjoyed putting their stickers on their finished project.  Both Spencer and Molly have done a good job on working on their verse for the week as well as the questions that go along with it.

As far as Ryan and Dakota . . . Well, I guess they are doing pretty well for 2 year olds.  One of the questions is, “Who loves you?”  Obviously the answer is supposed to be, “God loves me.”  This question is followed up by, “Who sees you?”  Ryan and Dakota have gotten these questions right at different times, but they are more consistent in answering with the following . . . “Who loves you? . . . Grandma loves me!”  This is true, and I am sure that it is reassuring to grandma to know that, but we still need to work on getting the intended answer.

The photos from above are the kids calling grandma and telling them their verses and answering their questions.  They really look forward to calling her and fight abit over who gets to talk to her.  I suppose we need to work on applying some of the verses they have learned.