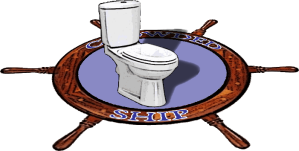 We believe in team spirit in our home.  Earlier today you could have heard in the children’s bathroom, “Push it out, shove it out, way out!”  Dakota thought that he needed to go poopy, so Linda placed him on the potty to begin the arduous task of going poopy in the potty.  At times the boys have showed some interest in using the toilet instead of their accessible on board poopy catcher.

Ryan and I sat in the bathroom with him to cheer him on . . . Push it out, shove it out, way out!  Ryan was so excited that he even peaked behind Dakota for a closer look.  I considered taking a picture of the situation but chose against it.  Ryan also successfully learned the chant, because for a brief time after the incident, he was walking around the house continuing the cheer.  I truly look forward to the first time his sunday school teacher walks up to me with a distraught look on her face as she tells me of how Ryan has excitedly been cheering on the rest of the class in sunday school.

Meanwhile . . . back at the potty . . . Dakota was victorious.  While the prize poopy would have reminded Ann Marie of one of her rabbits little treats, it was still victory.  Dakota ended with, “Daddy, wipe me . . . I done.”  What a true joy for me to be part of such a victorious day.

We are really looking forward to the day that both the boys are completely potty trained.  From the money we save from the diapers we will be able to afford more gas for our vehicles.  I guess you could say, we will save on one gas and be able to buy more of another 🙂

2 thoughts on “Push It Out, Shove It Out, Way Out”